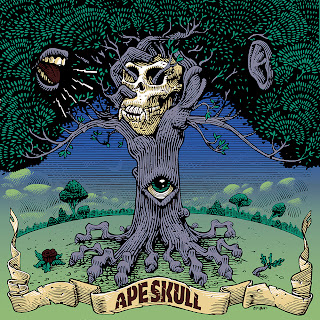 Capturing the essence of an artwork is the most important thing when creating it, and I believe this essence can only be captured by trying to only capture this, and not dwell on it. In my visual arts I do this by quicksnapping photos, quickly and emotionally sculpting and painting, and in general just immediately carry out ideas I have. This Italian trio named Ape Skull must have thought the same when recording their debut, as they finished it in only one session, and in that one session they've definitely captured the glory days of the hippie age. Heavy doses of psychedelic rock that make me long for a hot summerday in the park, some cold beers and a gathering of people just chilling. Now the album's last song Hooka kicks in it reminds me that one of those would be granted a warm welcome too. Ape Skull might be one of many that follow the yearning for the music of the days of yore, but to me is the only band that fully succeeds in capturing that old but not forgotten sound. The production is a lot clearer than the old classics but I'm not one to say that it's 'overproduced' just because it doesn't sound like it's recorded in some leaking basement next to the town's main road, I call better recording equipment. Whatever the case, it doesn't matter to me, and shouldn't matter to you too, as the tunes Ape Skull play are what is important. Rightfully so at that. Their tunes will, in my quaint little music library, join the ranks of Steppenwolf, Grateful Dead, Jefferson Airplane and the likes. Yes, I am putting it up there. They may not peak Led Zeppelin or my favourite old time rockers Deep Purple, but they are up there. It is just really, really good, and keeps getting better the way the album progresses. Go and get it. Go on! What are you waiting for, for this review to end? Screw this review, just enjoy Ape Skull!
There's actually no downloadable release currently available but we've been given permission to hit you lucky lot up with a couple of tracks. But if you're yearning for more, go and pick up the super limited vinyl from our good friends at Heavy Psych Sounds! There's 200 on blue vinyl, 200 on yellow and 100 on violet, but get in there quick because there's not many left!
~ Ruben