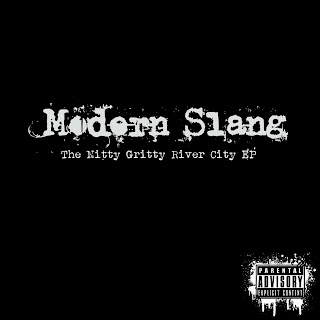 Memphis, Tennessee is home to yet another one of my modern rock 'n' roll favourites 'Modern Slang.' The irony of all this modernness is not lost on me though, as Modern Slang sound like they've just entered the seventies. But unlike the retro rock wave that's been hitting the music world lately Modern Slang don't get their inspiration from Led Zeppelin or Black Sabbath. The Nitty Gritty River City EP is laden with Skynyrd vibes (especially songs like Saturday Night Special & I Ain't The One), but it definitely isn't a copy! The Modern-retro-sounding-Slang do their own thing, their own very Southern rocking and rolling thing. The strong riffage and catchy choruses make this one of my favourite records that I've heard over the last couple of months, that makes me ache for a party even though I'm barely recovered from yesterday. So if everyone'd be so kind to get over to their site and buy their record for a measely 5 dollars these guys might get enough money for a European tour so I can party at their show (and well, you guys too offcourse!).
~ Ruben