Lost In The Desert... 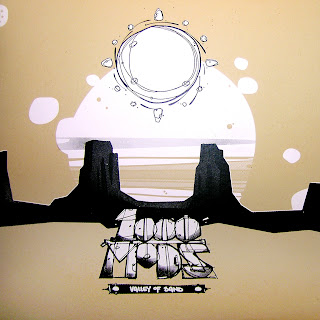 I really don't know why I've not had these guys on here before. They've been right at the top of my iTunes for years and their blinding Super Van Vacation can often be found doing its rounds on my turntable. Still, better late than never.
If you're already familiar with this little Greek quartet then you don't really need to be told what to expect in the way of quality, because lets face it, outside of California, there are few bands that can pull off the desert rock genre with the same distinction as 1000mods. That being said, they have approached Valley Of Sand from a slightly different angle to all their past works. This time around opting for more of a Causa Sui vibe, they've cranked the overdrive down a few notches and set out on a 17 minute, mellow jam-fest. Meandering down a fuzzy highway of classic Sanata-like licks, they twist and turn throwing the odd haunting vocal groan your way before building the tone and pace up slightly, only to lull you in and drop it back down again before the long fade out. It's somewhat at the other end of the genres spectrum to Super Van Vacation but it's still an excellent example of good ol' desert rock psych. But for me though, side B is what really slays it, as you're treated to 3 live tracks that well and truly cement just how goddamn talented these guys are. If after the final 18 or so minutes you don't have an unquenchable thirst to see 1000mods live then I can only assume you are utterly void of a soul. But fear not, if you have got a brain in that skull and you do wanna actually watch the guys doing what they do best they'll be doing the rounds throughout Europe as of 12th April. As well as various shows within their homeland they'll be visiting Bulgaria, Romania, Slovenia, Germany, Holland and tearing up the opening day of Desertfest here in the UK.
Oh, and if wasn't good enough news for you, you can pick this little gem up on limited white wax, via the band themselves or our friends at Kozmik Artifactz. There's only 500 of these pressed, so move fast!
~ Jay