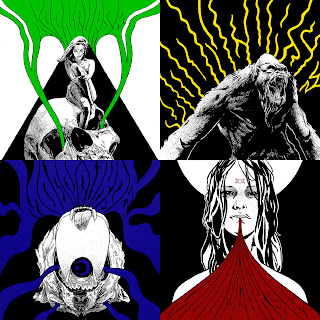 There's a lot to be said for a good album cover, and I will happily argue way into the night with any man, woman or child that says otherwise. In fact I once almost punched a guy in a Korn hoodie for referring to the cover of Leaf Hound's Growers Of Mushroom as 'shite'. What can I say, you've gotta stick to your principles. I'm not saying todays efforts are all lack luster, or even that all classic rock art work was mind blowing, but really, if you think back to to all the seminal covers over the years, most of them came pre the digital era. Back from a time when, (kids, brace yourselves for this) we actually had to leave the house to get music, then while you were perusing the shelves something would just jump out at you and grab your attention. Granted, I missed the real heyday of this, being born into an age, post the likes of such albums as Led Zeppelin III where a wheel in the front sleeve that when turned sent the cover all trippy. Or The Bonzo Dog Band's Tadpole, where pulling out the inner sleeve made the bands eyes change in a truly Monty Python like fashion. There just seemed to be more effort back then, hell, just look at the recent loss of legend Storm Thorgerson, he didn't just have possibly the greatest name in ever, he delivered some of the best album artwork in history as well as proving that covers didn't necessarily have to be overly complicated, they just had to grab your attention. Which coincidentally is exactly how I stumbled upon Milwaukee's psych doom trio... Moon Curse (it also goes some way to explain why I've put up all four alternative versions of the cover of their vinyl). While bouncing around Instagram and trying to avoid endless pictures of people's goddamn meals I happened across some fantastic work by a chap called Vincent Zager. One thing lead to another, and amid a whiskey enthused internet search, I land upon a bandcamp page where before I knew it I'd bought four copies of the the same bloody album. But to be fair, most of my best internet purchases have been fuelled by some of Tennessee's finest, and without question Moon Curse certainly slip into this category.
Some may question the validity of comparing them to Uncle Acid, given the almost dizzyingly high pedestal they're currently atop, but to hell with it, I'm sticking to my guns. That same doomy psychedelic style is there in droves, whaling eerily at its highs and growling with a gut thumping rumble at it's lows. Which for me is actually where they outshine Uncle Acid, as there just seems to be that little bit more diversity. More twists and turns to retain your attention. You can hear an evident inspiration sure, but it's far from any kind of rip off, before you jump to that conclusion. Moon Curse have carved out their own sort of niche within the genre. Adding a extra layer of what I can only really describe as furiously or directed anger to their style in certain places. The switching of vocal style mid song is also used to full roaring effect too, most evidently in the final track Black Elk. Beginning with a wholly impressive harmonic that flows perfectly along with the bass as the track progresses through the six minute mark, the darkness draws in and Matt cranks up the tone to a melodic metal before opting for a balls out crushing doom roar. To say that flitting that effortlessly from beautiful to brutal is a skill would be an understatement. But Matt, Rochelle and Keith have clearly managed to really click together, and it shows in every single track. What more could you possible ask for? You're given big screaming Sabbath esque riffs, awesome vocals that sound like they're being bellowed from within a church hall and an overall tone that would be no more at home than if it was to be laid directly over clips of 60's and 70's cult horror films. In fact, I'm really tempted to put on Witchfinder General, stick this on repeat, then drop a heroic dose of mushrooms... Actually, come to think of it I will be in Amsterdam this weekend, so not to give too much away, I will be double checking that this has been put on my iPhone before I head to the airport.
But if just downloading the album for free isn't enough for you (and nor should it be!) I urge you to follow suit and please grab yourself a copy of the vinyl! Mine turned up this morning, and believe me when I say it sounds bloody amazing! There's only 300 pressed, with each of the covers limited to just 75 pieces each and they're going really fast. Plus remember, they're unsigned and doing everything off their own backs. So if nothing else, just look at it as an investment towards the next release which is currently in the works. Already written, they plan to hit the studio at some point throughout the summer with the same producer (Nolan Trealo) as before, and once again doing it all analogue, which let's face it, should be the only way to do it.
~ Jay