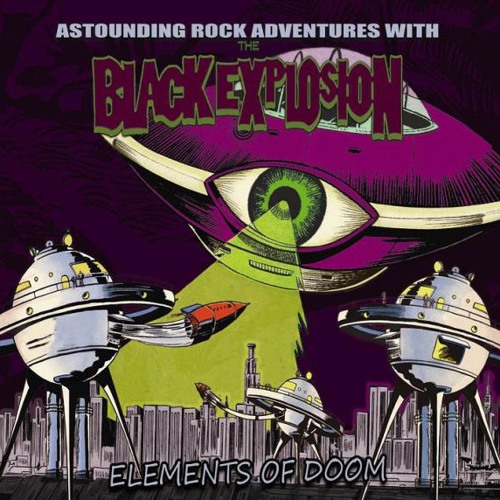 The Black Explosion's second album, Elements Of Doom, opens with the sound of wind on a lonely mountain-top, before some old-school heavy metal guitar and drums kicks in, setting the stage for some Ozzy-like vocals and energy. Blue Cheer and Deep Purple are just a couple of the other bands that might come to mind while listening to this album; it has that '70s heavy kick to it, without letting itself get bogged down too deeply in that swampiness into which so many modern doom metal bands throw themselves. At the same time, they seem intent on throwing the switches and energy up higher than other contemporary heavy rock revival acts.
The bluesy psychedelic taste of classic heavy metal runs the show here, and The Black Explosion's willingness to get swept up in the spirit of things does a lot to help them stand apart from the crowd. At the same time, there's a really nice sense of balance between all of the performers; nobody gets left behind or buried in the mixing, and everybody's pushing each other to blast harder. Snag yourself a copy of Elements Of Doom if you've been digging recent heavy rock bands like Kadavar, but find yourself wanting something that shakes looser, with fewer inhibitions, and with some space-age rocket fuel swirled into the mixture. Tasty stuff.
~ Gabriel