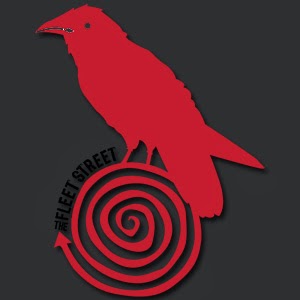 The Fleet Street started in Hungary, back in 2011, and released their first demo "Chaos From My Mind" to the world at the end of last year. This one is a little different than the previous stuff I've been forwarded for review, and it's not the female singer, or even the covers of pop songs, though I think that is a first. It's the fact that this whole demo is catchier than VD in a whorehouse, from the opening guitar riff to the closing vocal notes.
The track "Inside" starts us out in a Grunge direction, a bit like Alice In Chains, but with intense, female vocals. This track is a pretty good introduction to the band as a whole, showcasing their strengths, from mellow and more Bluesy vocals to long, soaring notes. The guitar is what brings this song full circle though, from the aggressive, distorted opening riff that switches on a dime and changes into a pounding Hard Rock riff into a blistering, well executed solo to finish the song out. The last of their original songs on the demo is titled "I'm Alive", and has all the symptoms of a really melodic Punk Rock song, fast and loud guitar attack, simple but groovy and fun bass line, whirlwind type drumming, and a good, catchy chorus that takes center stage of the song.
Now, the last two tracks are covers of Pop songs, but with their own sort of rock flair laid thickly on top. As a rule of thumb, I'm skeptical of covers, rarely do they offer anything better than the original inside of a genre, but when you go genre swapping, well that opens up possibilities some. The first is a cover of a Hungarian Pop song by Noend & Metzker featuring Dukai Regina titled "Don't Let Me Know", the second is a cover of "Where Have You Been" by Rihanna. With both of these, that Pop catchiness is definitely retained and will more than likely have you humming or toe tapping one of them at some point in the day, speaking from experience here. Overall, this is a pretty damn good first effort for a young band, especially when you take into consideration that they had no recording budget, and basically got a friend to track the entire thing for free, should be interesting to see what they can do given an opportunity.

You can grab their demo for free over here at their website.
~Skip
For Fans Of; Alice In Chains, Nirvana, QotSA