Rotten To The Core… 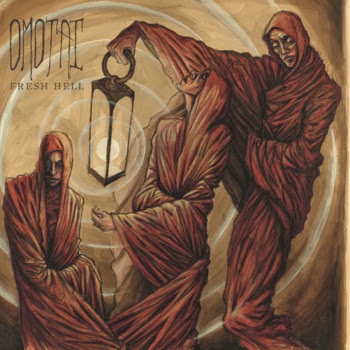 I have emerged on the other side of the frozen tundra that was most of the U.S. last week and am feeling like something a bit more upbeat. Thankfully, I stumbled across the fellas in Omotai a few days ago and have been giving their most recent release a fair number of listens. Falling somewhere between hard thrash and sludge, the group are an interesting listen that is bound to attract those enjoying the more technical aspects of metal as well as those who just brutal riffs and solid musicianship. Nothing short of impressive and well-orchestrated, Fresh Hell is an album that loves to play with noise and unique tempo shifts that serve as an equal part to the metal elements as opposed to filler or background distortion that masquerades as music.
Right out of the gate, "Get Your Dead Straight" engulfs the listener in a haze of sludgy bass lines, chuggy guitars and yelling that screams all-to-familiar auritory territory; however, as things progress, Omotai delves deeper into a bag of tricks that really opens up the remainder of the record. "Back Office" serves as perhaps one of the best examples, following as the second track and blasting through the speakers with a breakneck drum roll and prolonged chords, more a punk vibe than metal. A few noticeable vocal audibles, including a quick but effective "whoop" at the end of the first verse, add some fun to the whole sound, which eventually transitions back into an ethereal drag of fantastic guitar solos and precision drumming.
Throughout the remaining meat-and-potatoes of Fresh Hell, the group keep up a solid pace, but opt for a switch to sing-song vocals that seem to ooze from beneath the music, whether it be fast or slow. Interesting note-tapping and chords play a huge part in the back half as well, showing a lot of diversity that helps the album move along where one would traditionally expect an album to waver.
As always, the best things in life are put on vinyl. Fresh Hell is no exception, but is limited to 500 pressings on either classic black, clear orange with black haze or solid white. Those interested in the color variations can check them out here. Further offerings from Omotai can also be checked out at The Treaty Oak Collective.
~Joe

For Fans Of; Kowloon Walled City; All Pigs Must Die; Deafheaven; City Of Ships