Maiden voyage of the Omega Sun 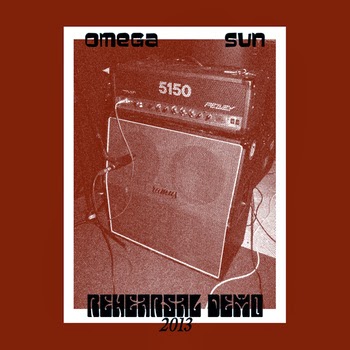 I'd like to introduce you to a little trio of musicians from Slovenia who go by the name Omega Sun. This is a straight up Stoner Rock band, no frills, no niceities, just fuzz and groove. They spent a night in December recording a two song demo, most fittingly titled "Rehearsal Demo 2013", and in those two songs they lay the ground work for a great band, and hopefully, a great album or EP to follow.
The demo consists of the songs "III" and "IV", and both are instrumental works of art. Nothing ground breaking, but excellently played Stoner Rock in the vein of bands like Earthless and The Truckfighters. From the super fuzzy guitar tone and killer riffs, to the absolutely monsterous wall of drums and bass you get slammed against from the very start, every member sounds like a seasoned musician. You can hear an example of everything I just talked about in the track "III" alone, a super heavy opening riff that carries you all the way to the mid point of the song and you just get sent off into a bass solo with a seriously spacey vibe, then come crashing back down with that same epic heaviness.
Their demo is up for free on the group's bandcamp page, so feel free to give it a listen and a download. I'm sure the next we hear of these guys their sound will be at least slightly different, as they've found a vocalist since the recording of their demo. I wouldn't really say it was a necessity from hearing this, but it will be interesting to see what they come out with next.
~Skip
For Fans Of; Truckfighters, Astroqueen, Kyuss, Slo Burn, Earthless