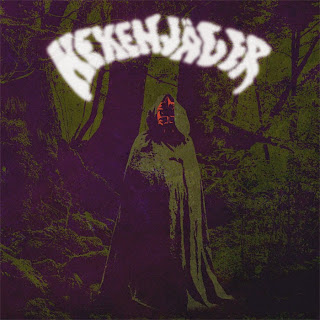 This demo comes to us from Hexenjäger, a new group based in France, and despite their freshness, the group already seems well-seasoned and toothsome, undertaking 20 minutes of doom for their self-titled track.  Despite the French roots and Germanic name, they go with a Spanish horror movie sample to open it up before plunging into the tar-coated and slow-moving main riff, a monster that the band follows relentlessly into darker and deeper regions before meeting their end.  It's a rich strain of doom metal, with sludge in the grit and occasional sharpness of the guitar, some traditional nods from the vocals and bass-tone, and a funeral atmosphere to the pace of the chord-crushing.  One of those big tracks that you want to hear a live treatment of as soon as you first encounter it, "Hexenjäger" battles its own speed down to the bones before eroding away completely.  There's a lot of patience going into the song, and if this is their demo material, there'll be some major head-turning noises to be heard on their future releases.
"Murk" makes up the B-side at a comparatively quick 8 minutes or so, bringing more psychedelic and traditional doom to bear, and it's not until almost half-way through that the vocals are revived for action.  The singer does a great job in both songs, assuming you're not inherently biased against clean singing, and the presumably rough recording conditions don't do much to diminish the band's skill at bringing it right into the song's folds.  Between the two tracks, Hexenjäger have made a great introduction for themselves by establishing how well they can kick ass even at low speeds.
~ Gabriel