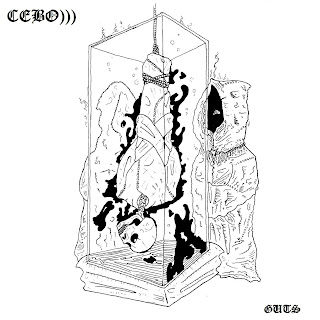 One-man sludge band CEBO))) is back with five more tracks on this new release, rolling on the momentum of Bloodwheel, which was released back in January.  Starting off with "Hill Country", a series of vocal samples from bluesmen and killers are threaded together with an undercurrent of bassy menace and understated humor, doing a great job of setting the mood while telling its own story.  The title track follows, launching into more dominant bass and bringing in the rest of the instruments, including the gruffly raw vocals, as a prickly riff develops into a craggy groove, leading listeners further in with the slow-bounce beats and thick tones.  "Sinkhole" makes for the last of the release's original tracks, getting further down in the swampy sidling rhythms before exiting on a keening note.
From there, a mean and gritty take on Cream's "Blue Condition" churns out the grime, switching between the vocals used on the previous two tracks and a cleaner (but synth-burbled) voice treatment, lending the interpretation a nice polish even while it swims in the muck.  Lastly, a cover of Willie Dixon's "Meet Me in the Bottom" cranks through it at high speed, making for a style that's like rockabilly filtered through sludge's sensibilities, and bouncing along like a pick-up with aging suspension.
The songs show a further growth of CEBO)))'s experimental nature, as well as the way the elements are assembled, and above all, he seems to be having fun with the material.  Check this one out if you want some sludge that recognizes its bluesy roots.
~ Gabriel

For Fans Of;    Church of Misery, Chronobot, Dopethrone, Groggy, Weedeater