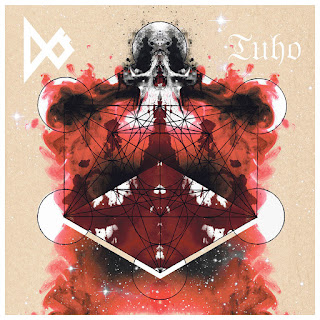 After warming up with a couple of EPs over the past couple of years, Finnish group Dö have released their first full-length album, and the six tracks held within it present their sludgy doom in fine form, deploying gruff vocals, pounding drums, and low-growling strings in a swampy mass of beats and anger.  "Born Under Black Wings" opens things up with a roar, pursuing that initial burst of power with dogged determination, throwing chunky chords and snarls around without fear.  "Everblast II (The Aftermath)" follows, switching in some higher pitch for the guitar and bringing some earworm melodies with it, riding the riffs through thundering drum-work and the lower strings' rumble. From there, "Ex Oblivione" shows more of that melodic side, with an instrumental ride through uneasy atmosphere and increasingly pressurized measures swelling to monstrous slamming.  "Kylmä" rides a rugged groove in to pick up where "Ex Oblivione" leaves off, working its main riff with focus and wonderful grime to the tones.  "Hail the Fire", the shortest track by far at a little under two and a half minutes, provides a calm interlude on acoustic guitar, with vocals toned down to match its quiet contrast.
But then "Forsaken Be Thy Name" rips into life, with its ~12-minute runtime to bring things to an end, and those moments of softness are gone, stomped out by a colossus of pain, savagery, and regret.  Sometimes using the full instrument set, and paring it down for aching power at other moments, the song makes for an excellent close-out to the album, showing even more variety to Dö's expansive style.  For a first album, the presentation by the band should have them winning over the ears of heavy music fans around the world in short order, so be sure you give them a listen as soon as you can.
~ Gabriel