Salem's Pot have been on an upward trend of exposure ever since Daniel Hall heard their Watch Me Kill You demo, and subsequently formed Easy Rider Records (soon to become RidingEasy Records) just to make sure the recording got a wider release and vinyl editions.  In addition to the releases Sweeden and ...Lurar Ut Dig På Prärien, the Swedish group has released a couple of singles and a split with Windhand; recently, that catalog has been expanded to include the band's first 'full-length' album, Pronounce This!.  Salem's Pot were kind enough to indulge our questions about their influences, the changes within the band, and what they see on the horizon. 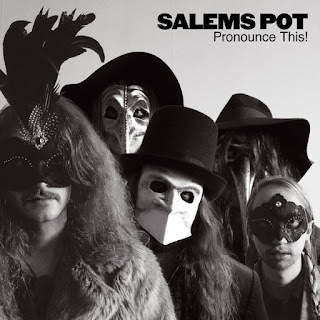 The Burning Beard: Hi there, and thanks for letting us throw some questions at you.  To start things off, what's the worst question you've been asked in an interview?  Aside from this one, of course.
Salem's Pot:  That is actually a good question.  Any questions about what drugs we took during our recordings or about drugs in general are pretty boring and we are pretty fed up with those questions.  Communication in music is deeper than just chemicals, if you've been there you know what it's about and it just comes out naturally.  I mean, have you reached yet?

TBB: As fans of old sleazy movies, have you come across any lately that really got you excited?
SP: Recently saw "Who could kill a child?" and I really liked it.  Possessed Spanish children on an island without spoiling too much.  Perfect summer movie.

TBB: Are there any particular visual artists (in film, painting, live performance, comic books/strips, etc.) who have had a special influence on the music and/or album presentation of Salem's Pot, or whom the band-members just dig on and would recommend fans of the band look into?
SP: Anything from the compositions of Ennio Morricone to the movies by Kenneth Anger and the music/live performances of Hawkwind.  Giallo movies and Hammer Films artwork are also a big inspiration.

TBB: If Salem's Pot could provide the soundtrack or score to a movie by any film-maker, live or dead, who would the top contenders be?
SP: Stanley Kubrick and Dario Argento.

TBB: Do any of the members have a favorite Stephen King movie, or is there no real connection there beyond the name?
SP: Stephen King's stories have haunted us since we were kids and Salem's Lot, Misery, It and Carrie, to name a few, are all awesome.  But Kubrick's The Shining is probably one of the best movies ever made.

TBB: In previous interviews, you've said that you never wanted to get stuck doing a single type of music.  What are some exercises or methods you use to keep things fresh?
SP: Well, it's pretty much impossible to make something that's never been done before, but we're trying to not restrain ourselves.  We never start a song by saying that it should sound like this or that, we just play what comes to our minds and if it sounds catchy enough it doesn't really matter what genre it is.   Also we are all into different stuff so we put in a little bit of everything, as long as it's creepy.

TBB: As a band which started out as a two-piece, what's it like to be working with such a comparatively large line-up these days?
SP: When the two of us started the band it was only one of us who played an instrument, so we took in a bass player and a drummer just to have a beat to make noise over.  The other one took care of the artwork and the visual parts as well as the concept.  He eventually learned how to play the organ and synthesizers and with the addition of that I can focus more on actually playing guitar.  We used to have a hard time finding a drummer who lived in the same town so a friend of ours, who's really a guitar player, took the job.  Finally he got sick of playing drums and was about to leave, so we put him on a second guitar and recruited the drummer from his old band.  It was really difficult in the beginning and pretty much sounded like total chaos, but now I can't see it any other way.

TBB: You did a great split with Windhand a few years back. Are there any other bands you'd really like to do a split record with?  Actually, let me fork that into two parts: bands who are currently active, and bands which you'd have to do some magic to reunite or bring some members back to life for recording purposes.
SP: Currently Beastmaker, otherwise The Cramps.

TBB: If money and other logistics were of no concern, what would your dream pack-in item for a Salem's Pot album be, aside from merciless psychic expansion?
SP: Probably an anti-gravity machine.

TBB: Was there any special consideration as to who wore which masks on the cover of Pronounce This!, or was it just what you dug out of your closets/picked up at the local costume shop?
SP: We all picked out which masks we wanted to have for our live performance and the clothes are from our own and our girlfriends' closets.

TBB: What are some of the strangest things you've encountered on tour so far?
SP: Russia was pretty crazy, everything from the vodka-fueled train ride to the drunken/stoned crowd in our dressing room.   One guy stage-dived without anyone catching him.  But there's been a lot of weird stuff on the road, some of it isn't even weird anymore.  After a show in Munich one of us tried to put his mattress into a small closet because it would be like "sleeping in a coffin".  It obviously wasn't even close to fitting and none of it made any sense, I guess he ended up on the floor.

TBB: Are there any annoying misconceptions about the band that you tend to come across?
SP: We've heard a lot of things, anything from that we really are a side project of Windhand to that we ride bicycles to our gigs.  Some people seem to be upset about that we don't play the same riff for 20 minutes anymore, but truth be told we just did that because we couldn't play any better.

TBB: What are Salem's Pot's plans for the near future?
SP: Amsterdam this weekend and Sonic Blast festival in Portugal in August.  And then a European tour with Electric Citizen in October that should be announced soon.  Apart from that, try to stay sane and not get eaten alive by the society.

TBB: Is there anything else you'd like to say to our readers?
SP: Thanks for sticking with us, without you this world would be long gone.

TBB: Thanks very much for your time and the excellent music!
SP: Thank you!