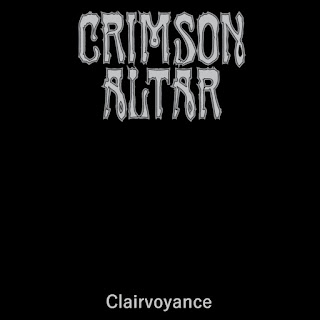 Coming to us from Portland, Oregon, the quartet of Crimson Altar are making their debut with this release, sporting four tracks of doom to make their first impressions on fans of heavy music.  The music has a little fuzz to it, and some nice emphasis on melody (particularly with the control shown in the vocals), but the band's main focus is on melding traditional doom with modern touches, not afraid to break out of the slow crush tempo for a lively bit of guitar noodling or some unexpected sweetness in the form of flute (handled by vocalist Alexis Kralicek).
On the whole, the band's efforts to tinker with the staples of doom while keeping its essence firmly intact are quite successful, though there are times where trying to find a balance feels like it would be better suited by diving more fully into the heavy end before coming back up with a lighter touch.  Aside from that, and a slight need for more rhythmic variations, Crimson Altar are in fine form, with songs that have a more than fair chance at getting lodged in memory until you find yourself humming out a few bars.  Good stuff all around, be sure to check this crew out; and if you're in the north-west region of the USA, you've got a chance to catch them live over the next few days, just check their BandCamp page for the dates.
~ Gabriel

For Fans Of;    Blind Samson, Brume, Jess and the Ancient Ones, Mist, Wolf Blood