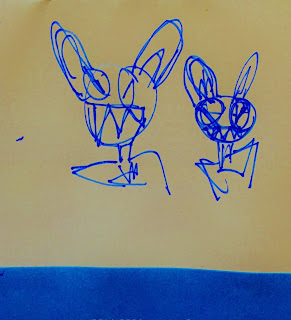 With his latest album, Chainsaw Rainbow's mastermind Dominic Massaro offers up ten new tracks of effects-laden guitar and dreamy drifting, including a new version of "Love is a Vapor".  Covering a range from soft-ringing chords to blaring feedback (and regularly layering the two extremes over each other), the songs play with contrasts of aggression and introspection, spooling out hypnotic loops but ratcheting the tension up to prevent getting drawn into drowsiness.  Punkish raucousness and shoegaze's pedal play are blended in interesting ways throughout the tracks, whether pushing into harder territory or slowing down to calmer cruising, as the swirling tones and heavy resonance bleed together in well-handled waves.
The album also shows some changes in the way Massaro is approaching the songs, though picking out particulars is a bit tricky due to the idiosyncrasies of each individual Chainsaw Rainbow release.  Where photorealistic had a focused, almost tunnel-vision-like push through channels of single-minded drone and pedal drive, Art Brut shows more diversity within the bounds of the tracks, wandering about and taking in some changes instead of blasting away.  While both approaches have their merits, it's a little too easy to imagine the musician getting worn out on the latter in quick order, so the signs of alteration are reassuring, while also giving listeners who aren't directly in tune with the fuzz-drone experience something more to latch onto if it's their first time hearing the band.  As usual with Chainsaw Rainbow, check it out when you're in the mood for some good-humored heavy psychedelic material with a wide streak of shoegaze and drone influences, and you should be well satisfied.
~ Gabriel

chainsaw rainbow - love is a vapor