Melody Amongst The Fuzz... 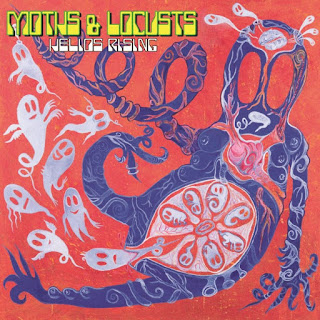 Melody is a musical tool that can too often be forgotten in heavy rock.  Distortion pedals might be the rock guitarist's ‘bread and butter’ but a keen sense of melody is always a good thing - yet many guitarists act as though distortion and melody are mutually exclusive.
Moths and Locusts clearly realise the power of a good tune though, as this most recent in a long series of releases from the Canadian quartet, Helios Rising, is every bit as melodic as it is heavy.  The guitars craft distorted melodies not a million miles away from Queens Of The Stone Age at their more aggressive; and vocals are clean, clear and well sung.
Although Helios Rising's compositions lack the repetitive, long form jamming of Space Rock, the album does have the genre's signature bleeps and bloops in plentiful supply throughout, adding a psychedelic element to the group's sound.  It's an effective embellishment that manages to never distract from the song itself.
In addition to the group's finely tuned sense of melody, there's a very natural sense of dynamics on the album too.  Troubled is a slow burning, atmospheric jam that suspensefully threatens heaviness for a long time before finally giving it.  The track's echo laden wails and murmurs give the piece a fittingly tortured sense of drama.
Overall, Helios Rising is a fine album that comfortably fits in with the wider heavy psych rock movement without losing its own identity.

For Fans Of; Hawkwind, Queens Of The Stone Age, Floor, Truck Fighters, Torche