Season of the Blues... 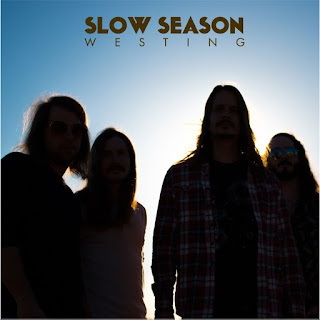 Slow Season's third outing, Westing, kicks off with a frenetic blues rock jam that sounds like the bastard child of Clutch and Led Zeppelin.  Propulsive, energetic and impossible to dislike Y'Wanna fulfils the classic role of an opening track.  It grabs you where it hurts and it never lets go.
The thumping, hard hitting drum work may lack discretion but it does supply the sort of furious backing Bonham would be happy with whilst the stop start riffage of Flag owes a similarly large debt to Jimmy Page.  If the spirit of Led Zeppelin hangs heavy over Slow Season then it's no bad thing and nothing that a million doom bands haven't done with Black Sabbath.
In ways more than just their influences, Slow Season have a decidedly retro aesthetic.  The majority of the songs on Slow Season fade out, rather than lasting until their natural endings.  It might not seem a lot but it hasn't been the norm to fade rock songs out since the seventies.  The slow grinding blues rock of The Jackal summons to mind the dust drenched blues of the deltas as re-imagined through the sphere of scuzzy old school hard rock.
Slow Season may not be innovators as such but there is something paradoxically refreshing about their sound.  You can compare them to the old legends all you like but it doesn't diminish the fact that they're actually very good at what they do and Slow Season proves this as much here if not more than their previous efforts.
If criticism had to be meted it would lie for me with the production; on songs like Saurekonig there's a slightly murkiness to the sound - a lack of instrument clarity.  Perhaps this is intentional, but a drier more directly punchy production would have better suited these decidedly to-the-point songs.  It's a small fly in an otherwise very enticing jar of ointment though.
Make no mistake, those who like their rock heavy on the dirt and even heavier on the blues will find much to enjoy here.  Those who don’t like heavily influenced music might be best to move on, as it's not hard to identify the album’s roots if you're out to do so – but I see no reason to penalise them for that.  Slow Season have produced an excellent heavy blues rock record here and those enamoured with the genre's downtrodden charm should give this album a listen pronto.
~ Martin