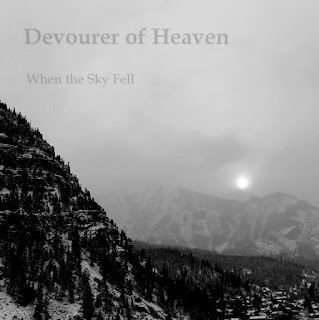 This first EP from the Los Angeles-based doom project Devourer of Heaven is the work of Alex Makuch, who wrote, performed, recorded, and mixed all of the songs.  "Rise" starts off the EP in a sedate tone, strings being gently warmed up, before the heavier elements filter into place.  Some nice grime to the guitar tone clears the way for the growled vocals, and as the guitar picks up into wilder life, the bass and drums swell out into a grander scope, fitting well with the track's title and laying a strong groundwork for what follows.
"Fire and Pain" takes it from there, with guest Sten Hasselquist contributing some extra guitar layers, as the mood shifts to more of a melodic doom sensibility, though the hard edges of the break-downs retain the kick of the first song.  A smooth shift carries on into "Empire Dead", showing some more overt funeral doom influences (balanced by some lively howls from guitar) as the weight of the chords intensifies and the bridging riffs slow.
Lastly, "Gallows Prayer" returns to the initial calm of "Rise", savoring some slow-picked notes before blooming into a lush arrangement working thick-nested drum-work against the slower strings, and finishing with a solid flourish and declension.  The variety put into the songs speaks well for the DoH project's future, as there's a sense of fruitful experimentation to each of the songs.  Far from being a one-note style worshipper, Makuch seems to be taking pleasure in finding ways of fusing non-obvious aspects of different doom strains together for something which challenges him, while not going overboard enough to lose grasp of the songs' main drives.  Good stuff all around, and a very promising start for the band.
~ Gabriel