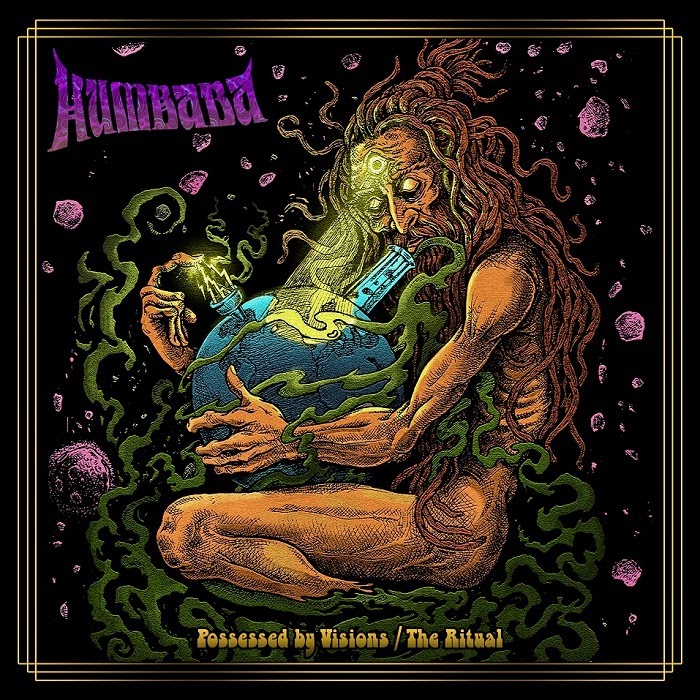 Named for the colossus of Mesopotamian legend, Humbaba are a new force hailing from Turkey with their two-track debut release. “Possessed By Visions” is a strong start, with psychedelic swirls cradling some guitar chords which build into a towering presence. There's something of an early Black Sabbath vibe in the near-bluesy note-drags and riffs, not to mention the great bass-lines, while the vocalist does some impressive work balancing clarity against the traditional gruffness.  Some very tasty work on the guitar's solo allows them to show off their potential for note-twisting slides and tunefulness, while the drums do a fine job of meshing in their power with the other instruments.
“The Ritual” keeps a lot of that approach intact, though with a more aggressive edge, letting howls break out of the vocalist and instruments.  Add that to some grooves that just grab you by the head and force it to nod along, some excellent use of reverb distortion, and some controlled shifting of tone and mood along the course of the track, and the work these guys have put in really comes through; there's polish and attention to the little details, but not to the point of overwhelming the essential grit to their doom.
As a first release, it's incredibly promising, and the group is already working on more material to turn out later this year.  Humbaba's looking for a label, so wish them luck in finding someone to handle their high-grade doom, and keep your ears open for more details as they develop!
~ Gabriel