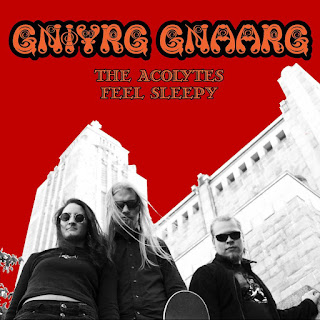 Gniyrg Gnaarg is a three piece band from Finland, and yeah, I have no idea how to pronounce their band name either, so lets call them Gnarly Gnaarg. Don’t worry, they have been quoted saying "You can pronounce it any way you wish, and it means absolutely nothing". Well, other than being the name of a ferocious troll." so there. Glory Glorg plays a mesmerising brand of metal reminiscent of Sabbath, with a hint of Om. The Acolytes Feel Sleepy Gloopy Glop gives us a three track demo that flows together as one song. The vocals are commanding and clean with a tinge of reverb hailing from a large hall. Normally when I hear a demo with clean vocals it's as if the band tracked everything and then they flipped a coin to see who had to 'sing' and I use that term as loose as 'gentlemen's club'. Not, Gloomy Turd though, as the vocals are what make this band and although I can’t understand a single thing, I can pretend even though they might just be reading the instructions on assembling a grill.
The instrumentation on this album is strong and clearly they have spent their time actually playing their instruments. Glitter Glock have previously been compared to Sleep, but I don’t see the southern groove in their music and I refrain from labelling this doom metal. Maybe if they tuned down, turned up the gain and had a more experienced mixer they would be dropped off into the doom cesspool as the riffage is spot on to lie in the muck.
~ Brett