They Came From Outer Space... 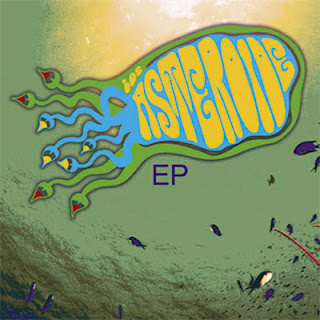 When listening to Los Asteroide I definitely feel like I’m riding on the back of a comet in an interstellar trip across the cosmos. Usually space-like music turns me off because it makes me feel kind of lost, but with Los Asteroide, it works because of the energy that’s put into the music and because of its concise and tangible blues, hard rock and stoner influences. Los Asteroide is an instrumental psychedelic stoner rock band, they sound like a diverse Radio Moscow if they themselves were an instrumental band. By diverse, I mean they have a great balance between the slow psych parts and their fuzzed out heavier riffs even within one song. Although it doesn’t quite reach the level of heaviness that bands like Sonic Flower or Karma to Burn have, Los Asteroide definitely stands out among these other bands because of this balance. Los Asteroide hails from Buenos Aires, Argentina, I can’t remember the last time I’ve heard something bad come out of those parts as far as music, and since I come from Brazil, I can relate with their fight to keep the classic style alive among the popular music of today.
I ended up doing some research and found that these bands with long stoner rock songs are inspired heavily by what people used to call “rave-ups” back in the day, as opposed to the modern “raves”. Here’s what a rave-up is: think of a band you like, on average the length of the songs they play are just around 3 minutes, right? But they have one song that deviates from that because it’s 10 minutes long or so, correct? (if you answered “no” to these questions just carry on reading the review, it’s not like you were gonna win a prize anyways). That one song (or songs) that the band plays for longer than usual, whether it’s live, in studio or both, is called a rave-up. What Los Asteroide (and many others) does is that they take the elements of long song length and the solo/riffage of the classic rave-ups to create these long instrumental jam-like songs.
Their album is up for free download on their bandcamp page, so feel free to indulge in this cosmic adventure just like I have.
~ Bernardo