The Quite Before The Storm... 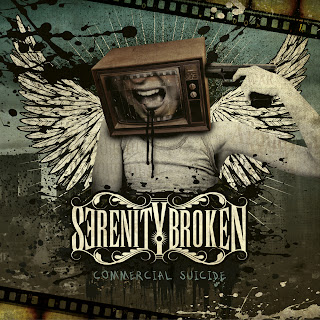 Isn’t it weird when an album’s cover art already sets your expectations for the music in said album? Well, that’s how I felt when I first saw the cover of Serenity Broken’s newest release Commercial Suicide, and here I really liked the fact that the art and the name of the album go along with each other. Unlike other bands where I don’t even understand the band name, and let alone the cover art. But that’s enough about the visuals, let’s talk about the music. This was a tough album to review, because as I was listening to it, I thought that maybe my computer was switching the tracks by itself, between a modern and cool rock song to slipknot-like metal riffs. When I saw that my computer was fine, and that my metal-head friends weren’t hacking it, I was twice as happy to see that these guys from Athens have seamlessly and successfully blended the two genres of hard rock and metal together. After listening with some more attention, I saw that the entire band was really dynamic in terms of song (and genre) structure: during the hard rock parts, the vocals are gritty, southern, and at times laid back, kind of like a mixture of Nirvana’s Kurt Cobain and the lead singer of Nickelback, the guitar is reverbed and distorted with uplifting chord progressions and the drums are cymbal-driven. Then, in the metal parts, everything switches around: the vocalist screams like a maniac (in some of the songs), the guitar goes into a reverb-less craze of single-note metal riffs, and the drummer “kicks out” the double bass pedal. Again, it was hard to review this album because of these switches between styles, but I do think that this is the main thing that made it stand out among the rest. And, I don’t remember having heard any other bands from Athens before, so Serenity Broken definitely sets the bar high for whatever bands to come out of Greece in the future.
Well, despite the name of the album, these guys aren’t killing themselves commercially because you have to pay 5 euros or more for their album. But if you have some extra money laying around, they have some other deals available whether you want to download or buy the actual CD and possibly get a cool t-shirt.
~Bernardo