Return Of The Beast... 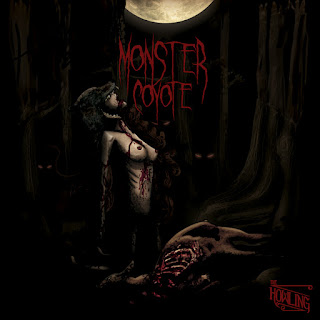 YES! Yes, yes yes!...
My favourite brutal metal trio have returned from the studio baring wonderful roaring gifts! That's right baby, Brazil's finest have returned with their follow up to last years blinding Stoner To The Boner and goddamn doe's it blow your hair back!
Remember the good old days when metal was straight to the point and there didn't seem to be some kind of competition to see who could jerk off the fret board the fastest? It was a simpler time, when bands concentrated more on producing brutal hard hitting metal and less on their image. Well this is well and truly a harking back to those times and it's exactly why I love Monster Coyote. Since their phenomenal debut they have always remained true to themselves and let the music do the talking. Hell, you only have to look at their promo videos or live recordings on YouTube to see that the guys are only interested in one thing - the music.
So what about the difficult follow up and how do you make a step forward from it? Well you don't, you step to the side. Why try and top something that was awesomely tight and pretty much hit the nail on the head the first time around? You don't of course, you try something a little different, you progress and move on, which is exactly what the guys have done. Don't worry, they've not jumped to the other end of the spectrum, they're not now making dubstep, or some other shite, no no they're merely shifted down a shade or two. The best way to think of it is probably in terms of Pantera and Down - change the sound a little but retain some of the key elements and create a whole new kind of beast. Where the first album brought a raw southern metal feel the new album rolls up with what can only really be described as colossal and tighter mix consisting of all the best elements of metal new and old, while all the time retaining the bands signature groove. Little hints of post metal shining through a thick heavy fog of balls to the wall heavy metal and sludge groove. It's hard, its heavy but most importantly it's unrelentingly brutal and charismatic. I know that sounds like an odd adjective to use when it comes to this kinda thing but when faced with torrents and torrents of poorly thought out and executed metal it really becomes a rare commodity to find.
It pains me so damn much that more people don't know of/don't get to hear this band because the fact of the matter is they piss, from a great hight, all over most other signed and well established metal bands out there. But I guess thats what makes them stand out for those who know them and I guess it also helps them avoid being corrupted and morphed into something they never intended to be.
The Howlin' is a pitch perfect progression to a mind blowing debut album, plain and simple and as my best mate Frank would say; "Heavier than a death in the family".
In Layman's terms; if you're not listening to this album you're f**king up.