A Dose Of Danish Doom... 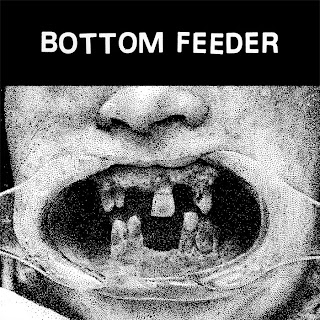 Pure evil sludge. Honestly, I could just leave it at that, but I’ll expand a little. Bottom Feeder’s self titled demo or EP or whatever is two songs long that leaves me wanting more, so I usually end up playing it again. This nasty sludge five piece hails from Copenhagen, Denmark and has enslaved Raw Birth records to releasing their doom offerings. They released a small run of tapes and seven inchers for these two crushing songs but good luck coming across a copy, they are hard to find. This demo meanders through heavy riffage that doesn’t let up and keeps you winding through each dead end corner lost in their wall of amps. Completely warranted space guitar wanderings flow smoothly while the giant beast chugs along crushing the teeth in our meaningless skulls. The vocalist exorcises from deep within, expelling a nasty goblin-esque sludge.
Bottom Feeder definitely knows what they are doing. If you are a fan of EHG and are looking for something darker, here it is. Last week, I had the hard time deciding when to play these two tracks at a doom metal night I had organized at our local pool hall/bar in Arizona. So, maybe I played each one more than once. And oddly there was some dude there from Denmark who also played in a band called Throw Me in the Crater.
~ Brett