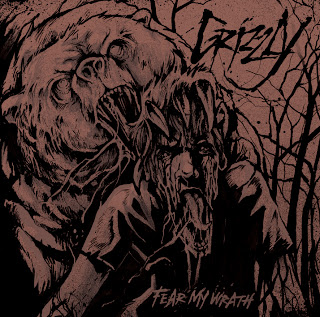 Damn, the second you hit play on Grizzly’s six track album Fear My Wrath they come out swinging and don’t let up until you realize you’re getting your ass kicked lying in the middle of Broadway being stomped out by a pair of boots only to ask, “Who kicked my ass? That hurt.” Grizzly brings us a fast up beat type of metal that is doom riff influenced, and breaks off into stoned sections with whining guitars only to bring forth the barrage of heavy distorted riffage. The guitars are heavy hitting and keep that stonery blues derived groove steady throughout the whole album. Raspy beer fueled vocals keep the groove on track only breaking to take another sip of Budweiser. Grizzly is a five piece from Budapest, Hungary. Budapest? I didn’t realize they had barbeques in Hungary. I only came across one image of Grizzly and I have to say, nice Tevas. Keep it heavy.
~Brett

For Fans Of; The Sword, Queens Of The Stone Age, Red Fang, Viking Skull, Steak