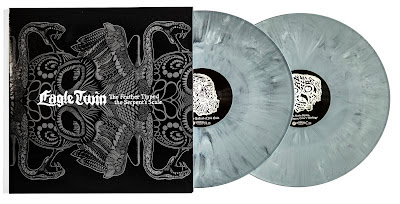 It's been way too long since I brought y'all some lovely new vinyl releases on here so I may as well come back with a real belter and this sure does hit the mark. Yup after nearly 3 years of waiting Eagle Twin have finally delivered the follow up to the brutally mind blowing 2009 debut The Unkindness Of Crows.
If you're only just catching wind of these guys then you're probably going to want to get your head around the term 'progressive doom' for starters. Why? Well this duo have managed to carve themselves out quite a niche over the last few years and as a result their debut managed to plant it feet firmly within several genres like a giant monolith on the doom/drone/stoner/sludge/metal scene. Three years later and the monolith still stands, now somewhat surrounded by hoards of cultists as their fan base has gone from strength to strength. It's no surprise really either especially after releasing this beast to wreak havoc on your eardrums. Stomping out the gates in a simular behemoth fashion to the first release, with it dark harmonics and haunting monk like chants/groans the first thing you really notice is the slightly more polished tone. Not always a good move for bands of this genre(s) I grant you, but in this case it's paid of exponentially. The occasional disjointedness or dark jazz elements of the first record have been all but reworked and attacked from a new angle tipping the genre scales more in favour of a post rock/metal ethos. Think Omega Massif but with a schizophrenic Al Cisneros (Sleep) supplying vocals and occasional stoner doom riffs. It's tight, its varied and to be honest it serves as somewhat of a depth-charge when it comes to blowing most other doom acts out the water. Lets just see if they can top it in another three years time.
~ Jay