Hell Of A Mouthful...

Hibagọn - ...VS Monsters Spewed from Time’s Stomach to Clutch the Universe in a Mortal Slime (2012) 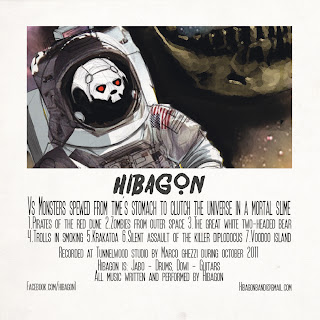 I guess you can call me old fashioned or maybe even ignorant in the fact that when I think of Italian music, I can only picture big fat opera singers having the world’s loudest conversation on a stage in front of thousands of people. Granted, I do love classical music and opera and I listen to it occasionally, but come on, rock music is where it’s at, am I right? Or else I wouldn’t be writing for this blog. So now I’m listening to Hibagọn, an instrumental stoner rock band from (you guessed it) Italy. The first couple of times I listened to these guys I noticed a great prowess in a musical skill that I believe is essential to instrumental rock music, that is, the flow between different riffs. By that I mean it shows that this dynamic duo really gave thought to the sequence of events in their songs and they’ve succeeded in intertwining amazingly pumping riffs together in a manner that doesn’t make the song stop. Well, this unstoppable train does often get crazy at times because of the experimental nature of the music that Hibagọn is making. In their album, the Italian duo often tries out unorthodox time signatures and musical patterns, which may turn off some listeners but to the trained musical ear, it’ll only increase interest (and trust me, if you visit this blog often you’re going to love this band). Strangely, every time I listen to them I have no idea what’s coming up next because of the different song styles in the album, ranging from almost heavy metal like volume-fests to soft lounge-like songs.

As you may have already noticed by the title of the article and the actual picture of the album above it, these guys went all out with the text on the album cover, I don’t think I’ve ever seen such a long album name, and it made me think, what is Hibagọn? And what exactly is it doing against the monsters from time’s stomach? Well, I did some research and Hibagọn apparently is the Japanese equivalent of big-foot…yeah. I guess the band members captured one and they’re trying to get money to feed it. But in all seriousness, download the album. It’s great and filled with surprises, and if you can, send them some money over (we don’t want the Japanese big-foot to starve)
~Bernardo

...VS Monsters Spewed from Time’s Stomach to Clutch the Universe in a Mortal Slime (320kbps)