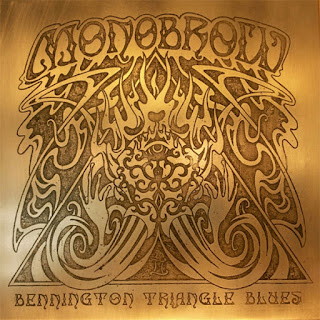 Fancy a trip back in time? Or maybe just a healthy dose of fuzzy instrumental psych to wash down that bong smoke? Well if you answered yes to either, or most likely both knowing our lovely followers, then you're in the right place today!
The Canadian trio really set the bar high for themselves with their first self titled release, so I think we can let them off when it comes to the fact that its taken 2 years to crank out this little gem of a follow up. But that time has clearly been put to good use, that much is evident in just the first few minutes. Where the first album rolled and thundered along in a predominantly fuzzy and down tuned fashion the new one feels a whole lot more rounded out. It's still bursting at the seams with huge fuzzy riffage, but this time around it's adopted a slightly more classic rock aura. That plentiful distortion with a touch here and there of echo really make this new offering not just pop but gives it a more layered and advance entire sound. If the first album was produced through haze of bong smoke the guys clearly hit the studio with a head full of acid. They're like a Pelican for the psychedelic generation, and lets face it, who doesn't want a little of that?!
~Jay