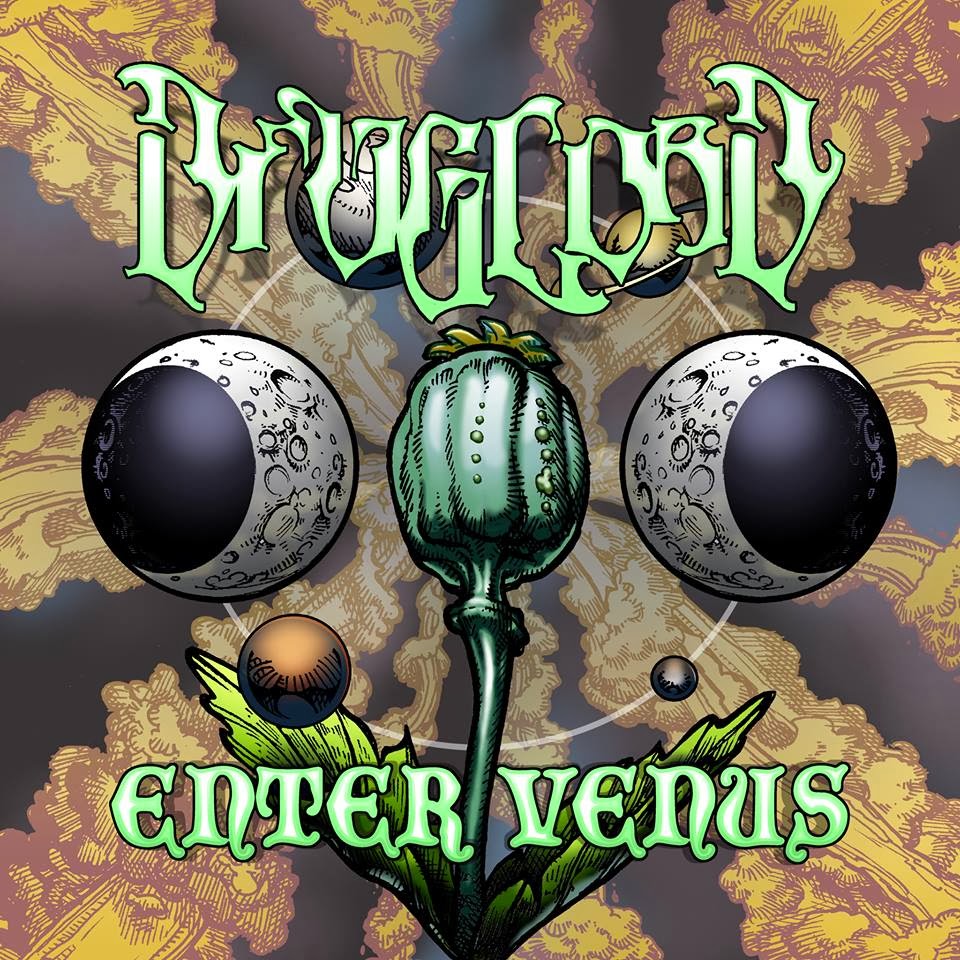 There's no accounting for taste. Hell, as I write this I'm actually knocking back cinnamon vodka with gold flakes floating in it (screw you, I'm out of Wild Turkey). But we do all have a friend or two who you can completely rely on when it comes to recommendations. Thankfully I'm blessed with at least five; Frank, Niels, Rich (Speedowax records), Dan (Easyrider Records) and good ol' Steve (STB Records). If any of these chaps point something out to me I know they're onto a winner. So last year when the latter dropped me a line to say he'd be putting out Druglord's second album and I should check out their first release, Motherfucker Rising, I knew it was advise I'd do well to adhere to. Naturally I did, and a matter of minutes latter I was throwing money at the band in return for a signed LP, a shirt and various other odds and ends. So imagine my face when I get home yesterday to an early copy of this, Druglord's mighty new album Enter Venus, on absolutely beautiful splattered vinyl.
Now, I know not all of you will be too familiar with this Virginia trio but to be quite frank if you're not, you're fucking up. Druglord are to music what Salvador Dali was to landscape artworks - fucking mental... and yet entirely awe inspiring. Best described as kinda like Windhand performing the best of Saint Vitus while under the influence of a heroic dose of mushrooms... if you can imagine what that would ultimately result in? Although I would advise you right now, not slap this album on while tripping yourself. It's so dark, down tuned and crushing that it kinda feels like you're being dragged to the very bowels of hell. Not an advisable route to travel down while opening the doors of perception.
So yup, Enter Venus, as you've probably already assumed, is a whole big bunch of terrifying. It pushes boundaries and stretches itself pretty widely over the whole doom genre that lines become blurred and demons abound. From your usual and expected fuzz laden, gut wrenching licks to it's almost schizophrenic (at times) composition, it strives to be both familiar and unorthodox, and you know what? It does just that. There's a beautiful chaotic elegance to it that I've just not experienced before. At least not all amalgamated in one place. It has that psychotic creepiness of Agoraphobic Nosebleed, sans the break-neck speed. The raw aggression of Weedeater, minus quite as much sludge, and all the reverb and sorrowful tone of Sleep, but without... Well, nothing really. Just all the reverb and sorrowful tone of Sleep. Maybe with just an angrier approach. It truly epitomises all thats dirty, blood-curdling and arcane about the genre... and I bloody love it.

Having initially suffered a minor set back due to the covers being damaged in shipping it will be up for preorder on in a variety of vinyl based forms. 115 'standard' copies, 100 for the euro market, and Obi press limited to 87 but most notably will undoubtably the diehard version, limited to just 48 copies and complete with a stamped and screen printed box and complete with a shed load of extras.
Goddamn, you guys are spoilt!
~ Jay


For Fans Of; Moss, Sourvein, Eagle Twin, Major Kong, In The Company Of Serpents