Downtuned In The Desert... 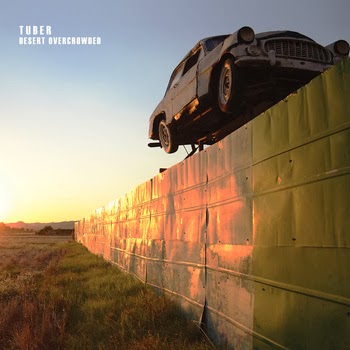 It is an awful -8 degrees here in Dayton, OH as I write my first review for 2014 and there's nothing I can think of more fitting than an album flush with warmth to remove me, at least mentally, from these sub zero temperatures like Desert Overcrowded by Tuber, who hail from (the oh so warm) Greece.
The album opens with an energetic title track that is both moving and intriguing. I find my self hearing certain elements of The Smiths at times, which is a good thing. Moving through out the record there is a certain sense of ambition about it as a whole. Taking well honed elements from areas of post rock and shoe gaze and mixing it with that desert rock sound, but in such a tactful way that it makes it all its own. Sometimes with bands in such a style as this things at time can feel a little forced or suspectly disingenuous. However this is far from the case with Tuber. This record has a feel and shape all of its own whilst removing itself from the clutter associated with the ever growing experimental genre. The closing track The South Will Prevail is a personal highlight for me. It showcases all the elements of the band while bringing in some interesting tribal elements. Never overdone and forever remaining tasteful through out!
Cheers to Tuber!
~ Stephen


For Fans Of; Sungrazer, Explosions In The Sky, Deserts Of Mars, Sun Eater, The Cosmic Dead