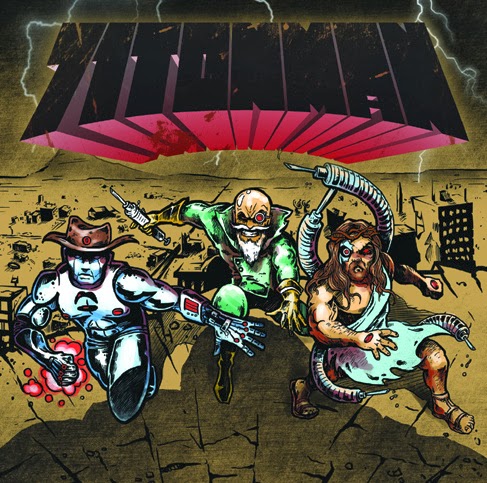 71TONMAN is a five piece Sludge band from Poland, and when a band like this has titled songs such things as "Bacon Bomb" and "Face Fuckin' Machine", you know you're in for a treat. They play an extra heavy brand of low and slow Sludge Metal. Incorporating different atmospheric elements in the music, and healthy dose of psychedelia to round out the mix, they're not quite like anyone else doing this style of music presently. Sure, there are plenty you could draw comparisons too, but you'll be hard-pressed to find one just like them.
Of the whole album, and all 6 awesome tracks, the one that really just did it for me was "Cyborg Jesus", it opens up with a textbook Sludge riff that trudges right along with the drum beat until a howling vocal performance starts up, vocalist switches between shrieking gutturals and hard edged, slightly Blues tinged vocals, even gruff, grunge-like vocals. The song continues on in like fashion until around the four minute mark the song takes a turn for the atmospheric with the addition of cleaner guitar tones, and lots of reverb giving some of it a slightly spacey vibe, that would be the healthy dose of psychedelia coming into play.
All in all, even with five of the six tracks clocking in at longer than five minutes length it still feels like a short album when it's over. I'm sure this partly due to the fact that each song is like it's own adventure, taking unpredictable turns at every opportunity. Even after giving it a fifth complete listen, I'm still noticing things I completely missed the first four times. Be sure to go over to their bandcamp and give it a try, you can't go wrong.
~Skip