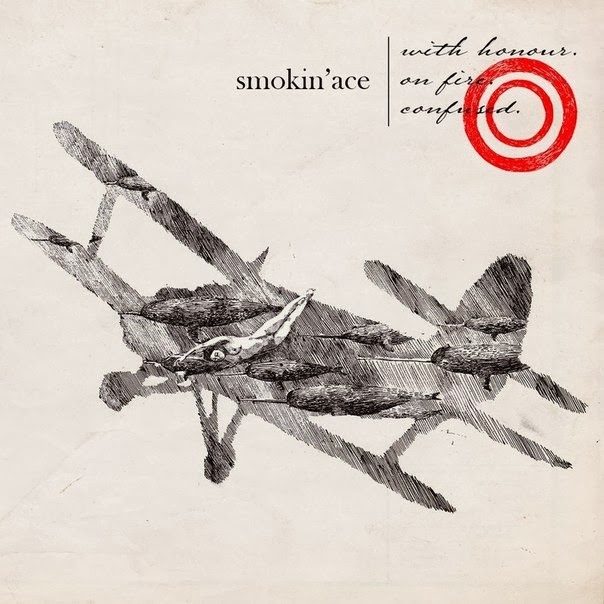 After reaching the finals of their country in the Emergenza music contest, Stoner Rock band Smokin' Ace has self-released their debut album "Honour On Fire Confused". This Russian three piece kick out slabs of the grooviest Stoner Rock imaginable, but still has those Retro and Blues influences all over it.
To start off their album the song "My Addictions" opens up with a drum beat and quickly escalates to a full blown Kyuss-worshipping session, nothing new, or fancy, just a killer Stoner Rock song, excellent riffs with the perfect tone, and a vocalist with a serious Blues edge in their voice. As an opening track, it does it's job perfectly and offers a glimpse into what the rest of the album offers. The following track "For Maniacs and Freaks" is just as swinging as the first track, with a great twangy main riff a la early Fu Manchu, the song definitely evokes that 90's Stoner Rock vibe, probably what most would consider the "Golden Age". The drumming once again is spot on, with the vocals taking a bit of a harder edge to them this go 'round, and one hell of a groovy bass line underneath it all. The last song I'm going to touch on for this write up is "Song Without a Reason", it opens up with a very folksy little Blues riff, with vocals to match and by the time it ends, it's been built up into a very heavy Blues Rock song. It drags on a tad, and is the longest track on the album at just shy of five minutes, but when a song is this good, it really just doesn't matter. The musicianship on this is perfect, every single part is played, and played to it's fullest.
To pick up a digital version of this absolutely killer album, and hear all the tracks I haven't mentioned head over to their bandcamp. It's a free download by the way, can't go wrong with that price, especially not on an album as good as this.
~Skip