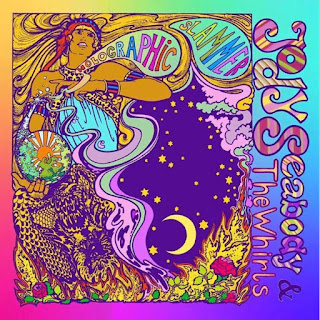 It can be difficult to find stoner and psych bands these days that trade in anything too original, so the everything-but-the-kitchen-sink approach of Jody Seabody and the Whirls' Holographic Slammer is refreshing, to say the least.  Jody and co. trek through numerous different styles on this album, often throwing an array of potentially clashing ideas into the same song.  The result is an imaginative record that throws genres around with abandon but somehow still manages to retain a sense of cohesion.
The technicolour splurge of the album cover suggests a groovier-than-thou '60's boogie psych throwback whilst the the acoustic opener of "Two Atmospheres" sign-posts a record of likable lo-fi singer-songwriter jams.  As if to prove something of a point, the next track, "The Grassman", is a lengthy jam that has its roots in the far-out blues of the early '70s, but spreads its pallet out as far as The Doors and the heavy stoner rock of Sleep.  Attempts to compare Jody Seabody and the Whirls to any one band are ultimately futile.  Comparisons to other better known bands are frequent but fleeting.  At times Pink Floyd is brought to mind whilst at other times any number of groovy stoner doom bands come to mind.
What sets Jody Seabody and the Whirls apart from the million and one other psych bands doing the rounds at the moment is that Holographic Slammer is an ultimately song-centric album.  Only on "The Grassman" do the band really let themselves go, and this is no bad thing.  Jamming can be great, but a set of tightly-performed tracks whose arrangements exist mainly to serve the song can also be rewarding, and this is essentially what Holographic Slammer consists of.
Holographic Slammer is an individual record - while certain songs and moments strongly bring to mind bands of the past, this collection is diverse enough to not sound like any one band all the way through, and ultimately makes for a fresh, enjoyable listen.
~ Martin