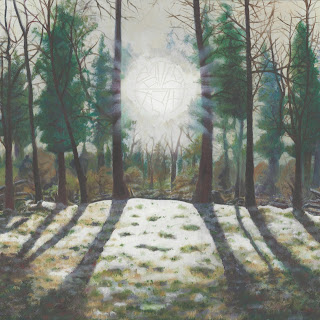 Hailing from Tennessee, Battle Path have been putting out material since 2011.  With this new album, they have a new drummer, Jeremy Trotter, as well (though Casey Stickney is listed in that position in the album's credits on their BandCamp page).  Musically, on this LP Battle Path combine the slow atmospherics and wallowing tones of doom with the growls and aggression of black metal, resulting in a fusion that puts in a very respectable amount of work to impress listeners and create an album which builds on itself from start to finish.
While it's not without a few rough spots, the band has clearly evolved since their last album, Empiric, and the music seems much more vibrant overall, whether dredging through bassy reverb or tearing into fits of venom-loaded violence.  And while I may be a bit biased, I'd have to say that when they're going for a pure form of one or the other, it's the former section which seem to really show the band's strengths, as with the tense melody development of the title track.  But even better than that is when they bring the two together without trying to include every feature of each, so that, as in "Ascension", it's not entirely slow, not fully break-neck, but nonetheless, totally crushing and powerful.
As they continue to explore the common ground between the two styles, and further develop the character of their band and its dynamics, Battle Path have as bright a future ahead of them as a group with this sort of thematic focus can have.  Inherent Records and CrimsonEye Records have teamed up to handle the vinyl release of the album, with three color versions each getting 100 copies, so if you dig blackened doom metal, doomy black metal, or just heavy, angry, and powerful metal in general, be sure to check this out before it's too late to snag yourself a physical copy.
~ Gabriel