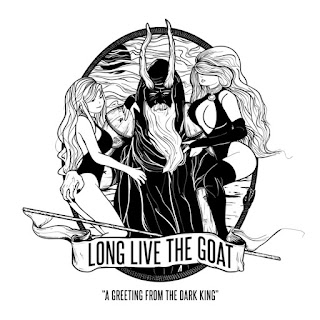 Chicago's Long Live The GOAT don't try to reinvent the wheel with this début release, however, they do give us two slabs of straight-up hard rock riffing that certainly leave a mark.  The guitar tones are chunky, the drumming is energetic and the vocals have the sort of gruff hard rock 'n' roll vibe of numerous classic '70s rock acts.  Winding, well-played lead guitar gives some melodic counterpoint to the crunchy riffs.  Both tracks here stick to the tried and tested heavy rock formula, but that's not a bad thing, and Long Live The GOAT do a good job of capturing the essence of numerous old school '70s hard rock whilst mixing it with a more modern-day heaviness.  With only two short songs on display here, it doesn't feel like the band really had a chance to live up to their potential, and a longer-running EP or full-length album would likely pay off well.  Nonetheless, this début release signals a band with potential to do something excellent in the future.
~ Martin

A Greeting From The Dark King (320kbps)