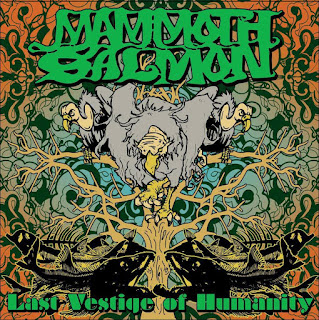 We've covered Mammoth Salmon here before (check here to see our review of their Call of the Mammoth EP, and here for their Internet EP 2), so it's good to see them putting out their first full LP.  Even better, they've really brought the thunder for this one, with massive riffs powered by thick bass, sizzling guitar, and heavy drums deployed with a great sense of when to kick back and let things ride a bit easier.
Tracks like the excellently-titled (and appropriately distorted) "Acid Casualty" and album closer "Believe Nothing" take the usual methods of stoner doom to almost funky modes of expression, while elsewhere, as in the opener "Ad Nauseam" and the title track, they plow ahead with some savage, sludgy fury.  Traveling between the two energy extremes, they find room for some excellent grooves and crescendos (and it's worth giving special mention to the rolling drum salvo which cracks open "Memoriam").
It's a little sad to see the clustered intricacies of their earlier cover art get toned down a bit for this release, but then again, they may have a better shot at pulling in new listeners if they aren't getting overloaded by all those whorls and tangles at first sight.  And this is an album that really deserves to be heard, not just by old hands of stoner doom, but by those in need of a great album to really draw them in to the genre.  Mammoth Salmon have done themselves proud here, showing strong command of the style's essence while drawing in some extra elements to ensure freshness.  Don't let this one slip by you in the end-of-year confusion.
~ Gabriel