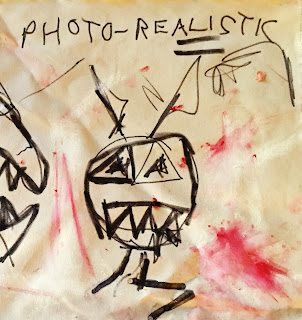 The latest release from chainsaw rainbow, this four-track EP finds JETDOG's side-project continuing to explore the heavy noise distortion and fuzz of long-drawn riffs.  "sidewinder" and "caffiene" [sic], the first two tracks on the EP, do their job by fading in, buzzing up to full deployment, and fading back out into echoes of their noisy reverbed strains.
After those, "sparkler" may be the stand-out of the four, with some cool delay-reverse effects on gentle and relatively clear notes building a firm melody before phased, whomping heaviness is introduced.  Being as it's the longest of the tracks, the room to space things out has "sparkler" feeling more like a regular fuzz rock song than the others, though it does embrace the wilder disintegration effects towards the end.
"violet gorilla" closes things out with twangy bouncing notes feeding off of their own amplification, developing a semi-hypnotic rolling momentum with enough hookiness to work as the last track.  Comparing photorealistic to earlier chainsaw rainbow EPs is a bit tricky (especially if you didn't catch them on release, as they have a tendency to disappear from BandCamp after a while), but with the return to vocalless riff-churning, it does seem to satisfy the urges that brought the musical project into being.  Those with a love of pedal effects and zone-out music will want to check this one out.
~ Gabriel

For Fans Of;    A Place To Bury Strangers, Boyd Rice, JETDOG, Loop, Stereolab