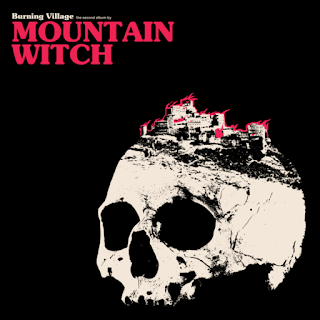 This review has resided in limbo for well over a month now. At the behest of our good friends over at This Charming Man Records, I've been sat Burning Village for longer than I care to remember, and being a long term diehard fan of the band, it fair to say it's nearly killed me.
I will however open with this - For those of you who have followed Mountain Witch over the years, you may be somewhat taken a back by trio's most recent sound. It's out with the traditional sombre doom-groove and in with something wholly more, well, retro. Fortunately the change to the band's dynamic has been pretty gradual, with the introduction of a third member and the subsequent release of Cold River, the band laid the ground work for what they have progressed to today. So the exchange of fuzz to funk shouldn't pose too much of a shock to the system. Fear not though, when I say that (often dreaded) four letter F word, they've not gone all stacked heels and slap bass. Don't think Bootsy Collins, no, instead imagine if Grand Funk had one day picked up a Ouija board and got heavily into the works of Aleister Crowley and Vincent Price, then gone on to release We're an American Doom Band... this is exactly how that would have sounded.
Straight out of the gates Burning Village states it's new and uncompromising intentions and opening with a subtle use of Hammer-House-esque samples they've managed to reaffirm that not all of the band's doom heavy origins have been cast to the back burner. Not by a long shot. While the tone, song structure and production all feel like they've been pulled right out of the early 70's the trio have managed to craft something that by the same token still feels heavily modern and unique. Not that the aforementioned is in anyway a band thing. Hell, I long for a return to those simpler, analogue days, and after the bitter disappointment that was Uncle Acid's Night Creeper earlier in the year, it's fantastic to hear an album that can actually conjure up all that retro feeling and essence while not feeling precocious or like the audible equivalent of watching paint dry. Sure, many of you who've become akin to the slower and darker of the band's first three outings may not be instantly won over or drawn to Burning Village, but I urge you to give it a few listens. Once the initial shock of the change has settled in, you can, and no doubt will, see exactly what this album is - An absolute powerhouse of early 70's inspired occult rock filled with more satisfying riff hungry eeriness than a Pentagram encore at a black mass under a full moon on October 31st.
The pre order for the album goes up on the 23rd of January (this Monday), and has been carefully crafted by our buddies over at This Charming Man Records, and will be available in two colours.
~ Jay