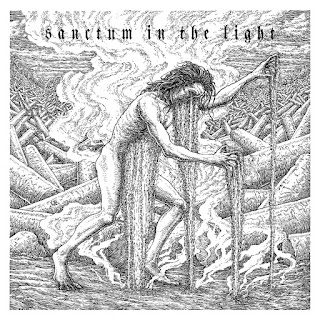 It's fairly rare these days for cover art to make me actually grimace, but Of Spire & Throne managed to make that happen with the artwork for Sanctum in the Light; go ahead and click it for a full-size view, if you haven't already done so.
This is the fifth release from the UK-based band since their self-titled debut came out back in 2010, and in keeping with the gruesome art and the grandeur of their name, the looming quartet of songs on SitL deliver effectively slabby doom, with a patina of sludgy grime to keep things nasty.  Rising up from bouts of crushing bass, the band shows a striking way with emergent melodies, using rare moments of poignancy to emphasize the heavy hitting found virtually everywhere else in the album.
This isn't just your standard 'chugging bass, slow drums, and fuzzy guitar' doom, though; OS&T carve out thick monoliths with intricate developments beneath the massive rumblings, drawing listeners into a deep-set maze that demands to be followed to its end.
"Gallery of Masks", the final track, does a great job of capitalizing on the album's build-up, taking time to cover the harmonic qualities along with the heavy, heavy riffs, and the aftershocks from listening to the full album will stick with you for a while.  All in all, this is powerful doom that doesn't sacrifice thoughtfulness to achieve its force; easily one of 2015's best, though I'm a little late in getting to it.  Happily, these four tracks have seen their way onto a double-LP vinyl release, so be sure to snap one up if you're in the set of those who like their doom to be dark and oppressive.
~ Gabriel