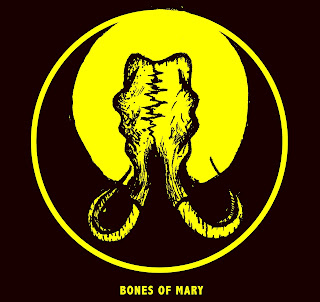 Coming from Tennessee, this quartet of bearded bruisers and their live demo EP (which comes with an extra track if you buy the EP off of their BandCamp) turn out a chunky, fuzzy, and low-tuned set of stoner doom tracks to introduce themselves to the world.  There's a kick of sludgy meanness to the vocals, and a few of the riffs also pick up that swampy vibe, though the rough ride of the music and the ringing it'll put in your ears leaves the impression that they're much less concerned with genre dogma than simply playing hard.
As a start to show their skills off, it's a solid set of songs, with plenty of bite helping them go beyond the usual 'bass and feedback' staples of stoner doom.  And while there is some Southern tinging to the riffs, it's not overpowering, but instead serves as a seasoning rather than the main focus.  The use of a spoken intro sample on "Hang In There" (the bonus track you'll only get by picking the whole thing up off of BandCamp) is maybe the clearest example of these guys working to think outside the box while constructing their tracks, so stay tuned for their next release to show how they've grown from this promising beginning.
~ Gabriel