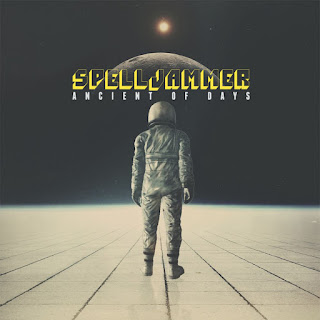 With their 2012 album Vol.2, Spelljammer released a modern stoner rock classic.  Heavy, trippy, monolithic - it was all of those things and more.  Original vinyl copies change hands for big cash these days, and it has a high reputation among many.  Following that album up would be a challenge for anybody but, right from the get-go, it's clear that Spelljammer haven't let their guard down with Ancient Of Days.
The 12-minute-long opener, "Meadow", is exactly what you'd want and expect from a heavy stoner doom band like Spelljammer.  It starts with three minutes or so of droning feedback and heaviness before kicking into a truly gigantic riff.  It's heavy and brutish, but also groovy, and there's definitely a degree of compositional sophistication here - there's effective use of quiet / loud dynamics throughout.  I've always appreciated an acoustic track or two on doom albums, and Spelljammer supply their own with the Ancient Of Days' second song, "Laelia".
The album is well-produced with some excellent, thick guitar tones and fittingly psychedelic vocal effects.  Much has been made in the press release of the group's new three-piece line-up; however, from where I'm sitting, it hasn't made a huge difference musically which is no bad thing.  It's not that this album is a rehash of previous efforts, far from it, but it's not a million miles either sonically or stylistically.  Fans of the band's previous outings will be very happy with what Spelljammer have offered here, whilst newcomers to the group will find a band that, for my money, sit with the best of all doom bands operating at the moment.
~ Martin


For fans of; Monolord, Electric Wizard, With The Dead, Windhand, early Om