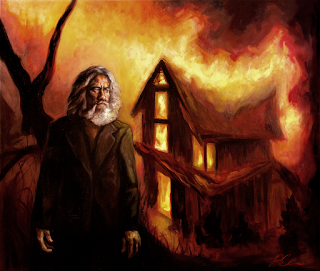 We last heard from The Fateful Hour with their album An Everlasting Silence towards the end of 2013 (you can find our review for that one here).  Now they're back with this full-bodied set of seven songs, running at over an hour's worth of doom and sorrow between them.
Opening track "The Face of Transcendence" takes time to clearly establish the melodic grounding of the band's style before launching the heavy bass rumbles, and the careful balance of elements continues in strong form from there to the end.  The expected trappings of melodic doom are given an extra shot of depression, with the keyboards providing delicate filigree over clean vocals singing of self-doubt and mortality.
Though they give the building of atmosphere plenty of time in which to grow, when they throw themselves into hard rhythms and driving riffs, they show a power biding its time for maximum impact.  Use of counter-part with vocals of drastically different timbres adds a further sense of size and depth to the tracks, and the group shows an excellent cohesion in uniting their instruments.  They also bring a sense of genuine emotion to the dramatic singing, something which too many bands in this style fall a bit flat with when it comes time to execute.
With poetic track titles, professional luster, impressive range, and a great sense of rhythmic punctuation for the sweeping tones, The Fateful Hour have assembled a damn respectable sophomore album.  On top of that, they seem to still be pushing into ways of expanding their sound and style, which has me already looking forward to their third album, though I fully expect that they'll take their time crafting it.  Until then, soak in the rich arrangements of this one, and if you haven't heard their first album, get that fixed as well.
~ Gabriel

For Fans Of;    Bell Witch, Jess and the Ancient Ones, Blackwater Park-era Opeth, Pallbearer, Thergothon