Fear For Your Child... 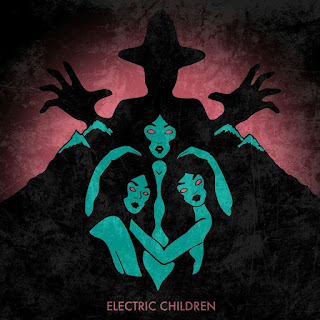 It's been a while since we've heard from the crew of Merlin (the most recent drop from them coming in the form of the Night Creep single, released a year before Uncle Acid's similarly-titled fourth album), and while their line-up has undergone some changes in that time, they're still turning out high-quality doom with unusual turns.
"Bad Trip" starts off the new album with some clear chimes before the guitar, bass, vocals, and drums rumble into action, fuzzed, distorted, smoked, and beaten.  The trail of heavy riffs leads from there into the title track, a dirty-sounding doom rock piece with enough occult seasoning to put a curse on your house should you switch it off mid-song.  A slower, smokier groove picks up your rattled nerves with "Will o' the Wisp", "Interlude" throws in some synth riffs that could have been plucked from an underground '80s horror movie, and then "Night Creep" jolts things back to dangerous life for the second half.
"Warbringer" and "A Reprisal for Julia" take things deeper into menacing heaviness, then through another atmospheric synth piece (one in which I was hoping to hear a Hellraiser sample pop up, I'll admit).  Finally, the ~23-minute monster of "Tales of the Wasteland" takes things back into the dark Western vibes which shaped so much of Christ Killer, finding room for shredding crescendos and psychedelic cyclones of swirling sonics (plus some chimes at the end to tie back to the start of "Bad Trip", so you can put the album on loop and let your mind melt away).
There's a lot of variety to the new album, giving fans plenty of replay value while letting the band show some new sides and explore fresh territory.  The pulp horror heritage, creepy tunefulness, and knack for turning tight grooves into expansive outpourings are all still there, but sewn back together into new forms and given a different sort of life.  With another ten minutes or so, "Tales of the Wasteland" could make for an album in itself, but all of the songs together unite for one hell of a trippy ride, showing Merlin in ace form.  Mark March 9th on your calendar, get the album, and don't operate any heavy machinery.
~ Gabriel