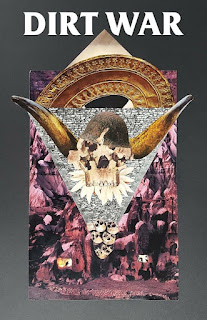 Three quick tracks and a longer closer on this demo from NY-based quartet Dirt War get the group off on a good start by blending stoner doom fuzz and bass focus (two bassists, no guitar) with gnarly vocals and a high-power performance from the drummer.  While there's a tendency to immediately throw that mix under the heading of 'sludge,' I'd say that the energy is the sludgiest thing to be found here, as the group side-steps many of that genre's usual trappings in favor of something a bit different, though there is a staunch aggression and battle-readiness to the playing and yells.
All of the tracks flow well into each other, giving listeners the impression of being present for an extra-lively practice session, and last track "Wolves" brings some extra thunder out to put a bit more doom in the balance of their style-mixing.  Good playing from everyone involved, the vocalist knows how to keep from going overboard with his presence, and in short, a good introduction from the band.  Check 'em out if you want something different with strong energy to its heaviness.
~ Gabriel