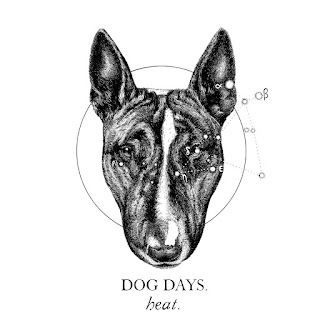 Good God, 2016 has got off to a rip roaring start. In the first two months alone I've stumbled upon at least five albums or EP's that would have easily made their way into my best of 2015. So lets not beat around the bush, lets crack on with the first of my best of this year so far...
Dog Days - mixed gender instrumental stoner rock awesomeness from Switzerland. Yup, you read that right. I'm not sure about Gabe, but I'm pretty confident that I've not had anything from there before. But hell, if this is what they can do then I'm seriously considering moving. This album totally and utterly slays. It's that simple. Even if you're not entirely sold on the whole instrumental stoner rock angle (pfft, do you not own any Karma To Burn!?) there's still so much to love about Heat. Right from the opening fuzz filled bars of Saluki you get the immediate sense of where this album is heading, and it doesn't for a single second disappoint. Mixing high octane, insanely satisfying riffs with an equal measure of atmospheric production and breakdowns is a touch of genius. Where most solely instrumental albums often play out like a jam session, Heat feels entirely tight and focused. In fact, it spends a lot of time feeling more and more like an incredible film score than your average stoner rock album. Whats more, this works, and bloody brilliantly too. Despite it's lack of vocal content, its entirely captivating from beginning to end. This is in no small part down to Vincent's master riffmanship. I realise I totally just made that term up, but I wholeheartedly stand by it. Just listen to the opening minute of Lancashire Heeler and you'll see exactly what I mean. Not to take away from the rest of the trio though! Marie's bass lines rattle your vertebrae and theres not a single track where you won't eventually find yourself air drumming along with Julien, especially track 2, Shiba.
If you like your stoner rock tight, relentless, with a little hint of punk prowess and a sweet nod to Led Zeppelin, then you have absolutely no excuse to go and get this album. And for all you tight bastards out there, you can even pay what you want!

If any of you managed to recently catch them locally supporting Cancer Bat's, then I both hate and envy you in equal measure. I'm so gutted that I can't get down to Desert Fest this year as I'd give a nut to catch this lot live!
~ Jay