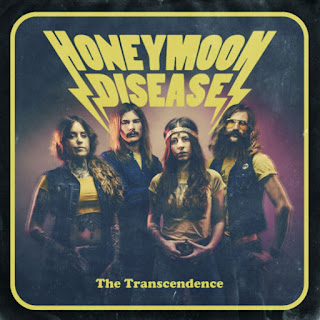 In The Transcendence, Honeymoon Disease (named after a particularly vicious STD) have created a compelling and well-executed album that brings to mind numerous '70s rock bands (as practically all modern heavy rock bands do).  Perhaps more importantly though, they also sit perfectly alongside their musical peers in a modern music scene that enjoys a generous number of excellent female-fronted metal and rock bands.
The first band that came to mind when I listened to the album opener, "Higher", was the classic Dutch psych band Earth and Fire.  While Honeymoon Disease are less overtly psychedelic and more in a classic hard rock tradition, the organ-heavy opener had more than a little of the fruitful late '60s / early '70s psychedelic scene about it, whilst still sounding contemporary.
Another older group that came to mind was Lynyrd Skynyrd.
Although less centered around jamming than much of the best-known Skynyrd, the energetic guitar soloing on a number of the songs here brought to mind moments of "Free Bird".  Honeymoon Disease also sit very comfortably alongside a number of comparable contemporary bands.  The retro psych rock of Electric Citizen and at times even the NWOBHM / doom crossover of The Oath is, if not particularly similar to Honeymoon Disease, then at least likely to appeal to fans of Honeymoon's impassioned boogie hard rock.
There are moments of psych on this record, but for the most part it leans more towards the danceable, energetic riff rock and even the occasional southern rock twang of Crazy Horse's frenetic country rock.  The result of these influences is a heady album of fun, easy to like rock 'n' roll.  It's not a game-changer of a record, but it's very hard to dislike and everything it sets out to do is done well.  Although it's not hard to compare this album to classics of the past, it's not derivative, and it's an enjoyable album from start to finish.
~ Martin