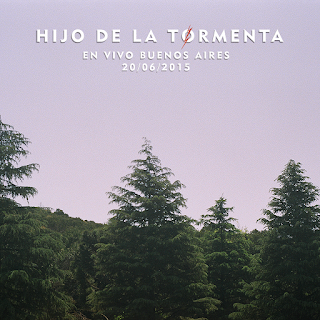 Following up on their self-titled album (you can find our review for that here), Hijo de la Tormenta have this live EP featuring a pair of songs which, as you can tell from the title, were recorded on-stage in Buenos Aires.  Despite the brevity of the EP, HdlT put in a good showing,
The first of the two tracks is "El Abuelo", a song which tempers desert rock with some heavier inclinations, bringing drifting riffs in line with a sharp percussive edge while taking the main melody through several twisting turns.  A bridge of sustained feedback and a casual bass groove gives things time to simmer before the band launches back into faster territory, and the grimy climb towards the finish takes a mean turn before the bottom drops out.
"Alienación" takes things down a heavier road, with a spaced-out opening riff leading into hard-thumping beats and a sinister fuzz undertow.  Subdued rumblings build into a powerful wave of converging hooks, and as the guitar wails off over the rising rush, it's all good.  The two songs make for an EP which should have any fans of heavy music who hear it looking to find more from this talented group, and stoke anticipation for whatever their next release might be.  Don't skip over this one.
~ Gabriel