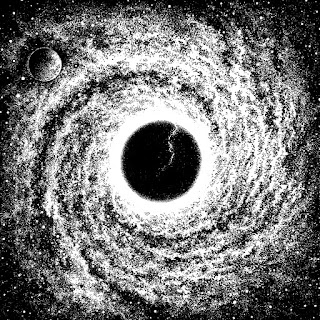 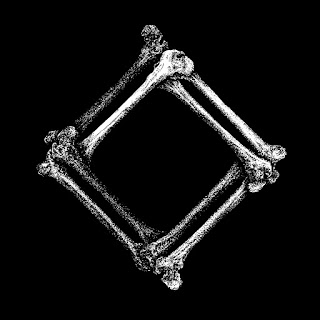 Though it's accurately described as a 'split single', the size of each track contributed to this release by its two Irish bands easily pushes things out to EP length, coming out just a few minutes shy of a short album.  Who gets the A-side depends on which band you get it from, but for our purposes, let's go with Nomadic Rituals (chalk it up to the ease of alphabetizing).
The group's approximately quarter-hour track "The Great Dying" begins with a slow build of atmosphere and faint bass notes before graduating to firmer resonance and solid doom.  Ratcheting up the heaviness into near-violent slams of down-tuned guitar crashing against the rolling beats from the drummer, Nomadic Rituals do an excellent job of handling momentum and the energy of the songs right through to the final bursts.
Tome turn in a different take with the other track, "Bone Divinations", using more feedback and sludgy vocal stylings to generate a crawling atmosphere of unease that's to be enjoyed more for the journey as it slowly builds to a crunch-out finish.  Both groups do solid by their listeners, so if you want some doom that's big and heavy without losing its energy along the way, give this split an investigation.
~ Gabriel