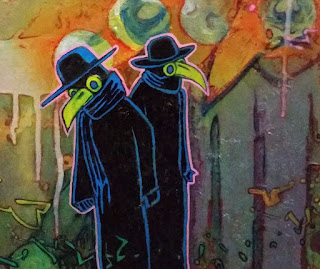 The Australian fuzz rockers of Lint are back to give their fans a treat with this pair of songs, which together constitute over a quarter of an hour's worth of psych-tinged desert vibes with a grungy edge.  Playing with strong energy and aggressive riffs, the trio of Lint show that they're still going strong after the release of their 2013 LP Existence (our review for which can be found right here), delivering some tasty grooves and mellow bridges put together with care.
Those who've been waiting for something new to emerge from the group since the album will be pleased by what's on display with these two songs, and while a larger release is (hopefully) on its way, there's enough replay value to these tracks that (as long as you don't leave it on loop) you shouldn't burn yourself out too soon.  Just let the band take you off on this rumbling trip, don't get freaked out when they start yelling, and you'll have a good time.
~ Gabriel