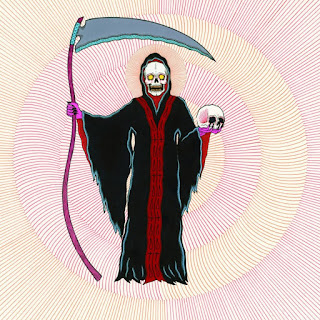 Kiev's Stoned Jesus are back with a bang.  That bang first comes in the form of an alarmed shout of "Jesus Christ!" before the band sonically kick every door in sight down with the tremendously fun three-minute racket of "Here Come The Robots".  While in itself this short sample that begins The Harvest doesn't seem too important - it only lasts a few seconds, after all - the sheer to-the-point punchiness of the sample can be seen as representative of the album as a whole.  It's not that everything on this album is short - the last track is nearly 15 minutes, whilst another is almost 10 - but Stoned Jesus manage to maintain a real sense of focus and clarity throughout The Harvest, even in the album's longer moments.
It's somewhat refreshing that even during the longer tracks at the end of the album, the songs never feel aimless and the group never rely on simply noodling.  There are extended instrumental passages but, thanks to some interesting riffs and chord sequences, they remain of interest throughout.  While the album's first two tracks are without doubt the punchiest - both clock in at near enough 3 minutes and both have a relentless tempo that defies you not to headbang along - the album's longer moments feel equally focused.
The seven-minute "Rituals Of The Sun" is an excellent slice of mid-tempo doom with a rock solid rhythm section and a tasty guitar tone.  "YFS" features the album's most melodic vocals, with the band taking on the feel of a classic American or British hard rock band of considerable vintage.  "Silkworm Confessions" is another interesting moment and, again, sees the band take on a different guise - this time incorporating prog metal influences, though perhaps more in song structure than musicianship.  The fifteen-minute closer, "Black Church", begins with some quasi-ambient atmosphere building before a rigid tribal beat slowly metamorphoses into a ridged, razor-headed groove.  It's a fantastically executed build-up and one that could so easily fall on its face.  It's a great track throughout and a memorable closing salvo to really well-made album.
Stoned Jesus have built a good reputation for themselves over the last half decade, and with The Harvest, it's easy to see why.  What they do, they do well, and there's a lot to like about this album.
~ Martin