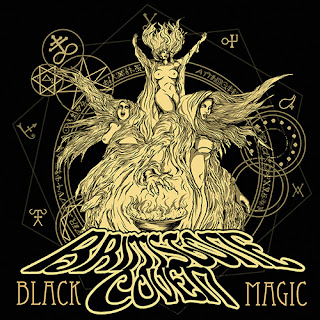 Harken back to 1969.  Doom and gloom was early enough to be refreshing, albeit associated with a lifestyle hellbent on the idea of destruction and filth.  Brimstone Coven would fit perfectly with any forerunners of the genre.  Black Magic is the name of the album at hand and perfectly describes the obsession put into the lyrics.  So fill your bong with whatever you prefer and step into the realm of fairies and black unicorns.
The band has a half-decade-long story started from guitarist Corey Roth writing the first five songs and recruiting "Big John" Williams for vocals, Andrew D'Cagna on bass and Justin Wood on drums.  These five songs appeared on the band's self-titled debut album, along with five more tracks and seven bonus tracks.  Check that monster out.
Plunging into opening track "Black Magic", we are greeted with demands to gain power to raise an ancient demon, to boil over a cauldron for potions and to complete incantations promised, most likely, from a spell book bought from a traveling blind salesperson in exchange from the purchaser's first-born son.  The following track, "Black Unicorn", to me, seems like a continuation to better understand the black arts mastered with an army of "a thousand demons" at the narrator's beck and call.  "As We Fall" is a strikingly slower song with continuing themes of a dark power, but with the addition of reaching out for wanting to share this new-found power with another.  But the entire time, there's a sense of wondering whether it's right to share it.  The album then delves into a better understanding of magick until the track "The Plague" and its sense of near-regret continues into "Forsaken".  Ending our tale of demons and minor control of the underworld is "The Eldest Tree", and our sights of destruction and doom bleed into the world we physically inhabit.  A reign of terror is sure to follow.
A fantastic second album with hopefully many more to follow.
~Richard